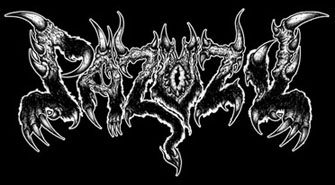 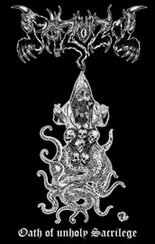 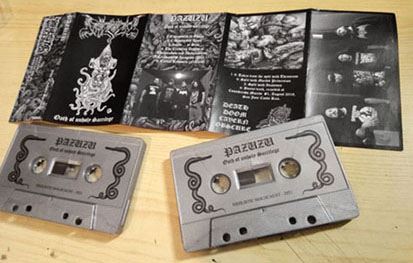 This release gathers all the tracks from the band's split productions, plus a bonus song (Nihilist cover).
This comes as a professionally produced silver tape, with large 12 pages booklet. Limited to 201 hand-numbered copies. 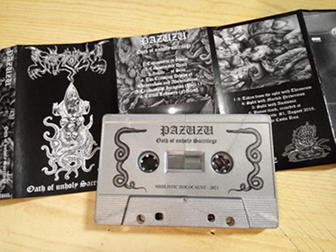 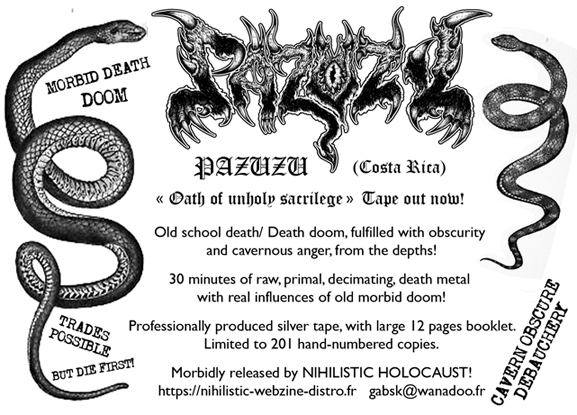 Deep in the underground of the world of Death Metal there are always some hidden gems that need and want to be discovered. And when I say “world”, I mean it, as there is no real surprise about the origin of a band any longer. In this very case, the country is Costa Rica and the band is called PAZUZU. Even though this San José based four piece started in 2005, it took them more than a decade and a longer period of hiatus to finally record some stuff. And they still haven’t really recorded that much yet. The discography of PAZUZU only contains a demo and five songs for three split releases. The recently released limited tape “Oath Of Unholy Sacrilege” compiles all these five songs with an extra track. Half the compilation consists of the songs from a split album PAZUZU did with Polish THRONEUM in 2018, called “In The Crypt Of Hakeldamach Feld”. And these three songs alone are worth getting “Oath Of Unholy Sacrilege”, unless you’re not into finest Doom Death Metal for some inexplicable reason. PAZUZU celebrate the style of old AUTOPSY and comparable acts from the days of yore in a way that is just a pure joy. Raw, down tuned and quite roughly recorded, it is especially ‘Calamity And Death’ that even features some classic Doom harmonies really hits my nerve. The other recordings are more contemporary. ‘The Crawling Depths Of Christendom And Abominations’ was released on a split with MORBID PERVERSION from Brazil in 2019 and shows PAZUZU still very rough and as fine. I just love the grinding guitars in the slow parts here! The most recent song ‘Ceremony Of Inception (Part 1)’ (from a split with ANATOMIA released last year) takes the same line and tops a collection off that should be a pleasure for all those who really dig some filthy and rude Death Doom. People like me, so to say. As a bonus, “Oath Of Unholy Sacrilege” features a live recording from 2019 of the old NIHILIST classic ‘Carnal Leftovers’ that sounds quite okay. Yet I could have done without it either, as it doesn’t completely fit the five original songs. But, as I already said, the PAZUZU songs are worth getting this tape.
https://www.voicesfromthedarkside.de/review/pazuzu-oath-of-unholy-sacrilege/