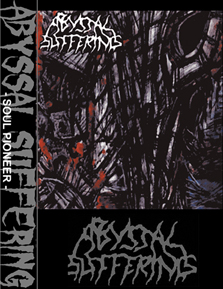 Underground brutal death, with influences of 90's technical death, and remains of the early thrashing genre...
Sounds like an undergrounded mix of old Deeds of flesh, Gorguts, Pestilence, Timeghoul...
With a member of Traumasphere, Penthos... 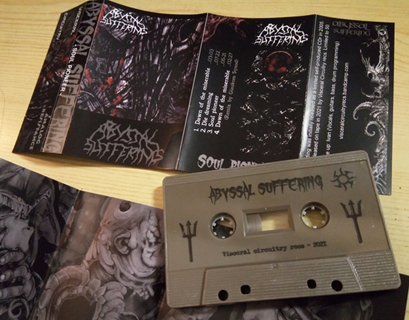 This demo was initially confidentially released in 2005 as a CDr,
but is now available again as a pro printed tape and pro cover! Limited to only 70 copies. 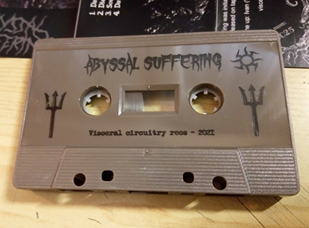 Please, welcome this talented multi-instrumentalist from the same latitudes as the ones I hail from, the Balkans that is; and he also has the same name as mine, would you believe… yes, Ivan Sikic has all the rights to view himself an underground phenomenon by releasing three high quality products under three different monikers within a short span of time, starting as Traumasphere which demo (“Voidcall”, 2001) was a totally delightful slab of very technical dissonant death metal that slightly predated the similarly-styled but much less comprehensible vistas of the Australians Portal.
This is his second spell with the music industry, and the man has voted to compartmentalize his delivery a bit more by siding more readily with the dazzling brutality movement (Cryptopsy, Suffocation, Kryptopsy, etc.) although this is a more engaging, more adroitly-constructed listen that also echoes meisterwerks like Psycroptic’s “Sceptre of the Ancients” and Crimson Massacre’s “The Luster of Pandemonium”. Sikic rages on full-throttle with the tight puzzling shredder “Dawn of the Miserable”, a surreal accumulation of time-signatures, maddening tempos, and ultra-dense staccato riffs, a most shining example of his bewitching style which on “Die Dreaming” turns to highly-stylized chaos with bizarre riff-patterns overlapping each other in a weird surreal fashion that even the Finnish auteurs Nomicon may find hard to match. There’s this underlying melodic current that unobtrusively guides the hyper-active shredoramas the man never losing his vision although that latter composition surprisingly offers a downbeat doomy finale which stretches to nearly 3-min... nothing inherently wrong with that especially when the title-track comes crashing down with a pleiad of perplexing jarring rhythms, a more abstract all-instrumental number with Sikic accumulating a pile of twisted melodicisms and crooked riffs to a strong hallucinogenic effect.
The man doesn’t slouch behind the mike, either, although his guttural semi-shouty deathy baritone can’t be anything but a side-dish under the very lofty musical circumstances; another brief breezy slab of tech-death wizardry has Sikic provided, easier to swallow than the first outing but almost as compelling and absorbing. He changed the direction quite a bit, though, for his third appearance that was named Ummon, and served ultimately abstract sterile thrash/post-thrash, a summation of what Voivod’s “Negatron” and “Phobos” were about but seen through a very robotic futuristic, more dispassionate perspective…
“how’s that possible?”, I hear some of you say… it’s possible, it’s possible; anything is possible in the world of a visionary, audacious musical adept. To be continued… if not in this, in some other more advanced world than ours. 92%
NIHILISTIC HOLOCAUST: Underground Death metal/ Brutal death webzine: http://nihilistic-webzine-distro.fr