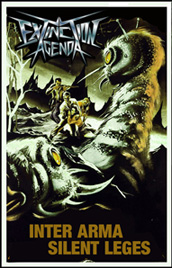 Kicking old school thrash with influences of old death metal and a blackened burning sense of the riff. 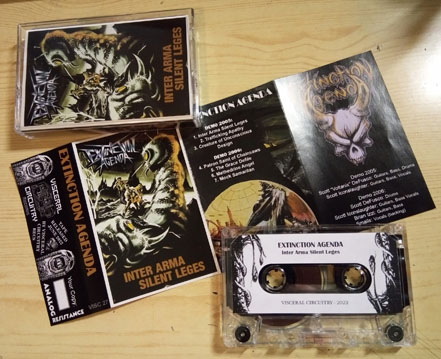 Get it from Visceral Circuitry records, also distributed by Nihilistic Distro.
Join the EXTINCTION AGENDA! 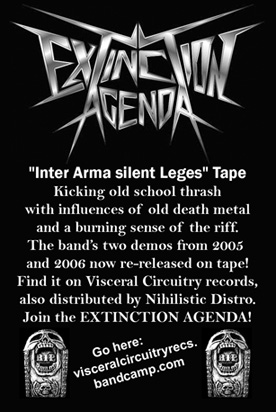 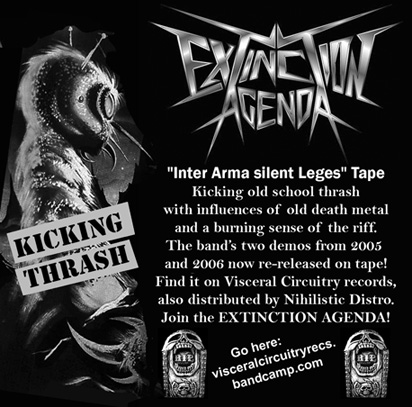 This is a re-release of this now long defunct Massachusetts bands 2005 & 2006 demos combined together for seven tracks and about twenty-one minutes of music. The band features the heart of what was the December Wolves, with all three members being part of that band. They play straight up ferociously fast and ripping, heavy mid to late ‘80s thrash metal that showcases some exquisite skill and craft some memorable songs. The riffs on here are massive and this band is a great riff machine. The drum works is superb as well, and the vocals of Scott Iconslaughter is excellent quintessential hoarse and gruffly yelled and sung vox that I found really infectious to listen to. Some bands that will surely spring to mind, in my opinion is early Exodus, old Kreator, Razor, Destruction, Infernal Majesty, early Slayer, Sacrifice, Dark Angel and other similar legend bands in the genre. Cheers to Visceral Circuitry Records for digging these demos back up and re-releasing them. I was around in the scene during this time (and long before that too haha) and still somehow I missed out on these killer releases. Thrash diehards who missed out like I did need this!  - Dale
http://www.canadianassault.com
NIHILISTIC HOLOCAUST: Underground Death metal/ Brutal death webzine: http://nihilistic-webzine-distro.fr